Canadiens give Jets rude welcome back to NHL

WINNIPEG, Manitoba -- The NHL returned to Winnipeg with a cold reminder of the challenge that lies ahead. It did little to dampen the warmth brought on by a massive civic celebration.

As the clock ticked down Sunday in Winnipeg's 5-1 loss to the Montreal Canadiens, the fans at MTS Centre rose to their feet and gave the Jets a standing ovation that was 15 years in the making.

"That's pretty incredible," said forward Mark Scheifele, who played his first NHL game. "In Barrie, when we'd lose, people would be leaving halfway through the second period. Definitely to hear that, to get a standing ovation when we lose, it just shows that we're going to have fans behind us regardless."

Indeed, it appears the honeymoon will last a long time between the fans and a young team that has work to do in order to make good on coach Claude Noel's assertion it can qualify for the playoffs. Last season in Atlanta, the franchise finished 12th in the Eastern Conference last season and all but four players who dressed for the Jets on Sunday were part of that team.

A couple glaring turnovers were costly against the opportunistic Canadiens, who bounced back from a season-opening loss in Toronto. Ultimately, the Jets were unable to harness much energy from an amped-up crowd following a pregame ceremony that included a tribute to Rick Rypien and a loud rendition of O Canada.

The players also had endured a long nine-day wait after the end of the exhibition season and as much hype as any of them have ever faced for a regular-season game.

"It was a pretty unique situation," captain Andrew Ladd said. "It's still not an excuse and we have to come up with a way better performance than that. But definitely a different situation and something that you know you're not going to have the chance to do this again. It's pretty disappointing with the outcome."

Carey Price had a solid game for Montreal with 30 saves, and Mike Cammalleri, Tomas Plekanec, Yannick Weber, Travis Moen and Max Pacioretty scored for the Canadiens.

The roof was nearly blown off the intimate arena when Nik Antropov scored the first goal for the reincarnated Jets early in the third period. Amid growing tension with Price looking unbeatable, Antropov made it 2-1 by driving hard to the net and shoveling a rebound behind the goalie with Brett MacLean parked in front.

A surge of momentum followed as Winnipeg poured on the pressure in an effort to tie it, but Weber made it 3-1 while Dustin Byfuglien was serving an interference penalty and the Jets never recovered.

"I thought it was a weak call," Byfuglien said. "I have a feeling it kind of [changed the game], but we've still got to go back to work after it happens."

Montreal was a hand-picked opening night opponent for the Jets -- "We thought it would be a terrific matchup," said NHL Commissioner Gary Bettman -- but it didn't play the role of gracious guest. Price was particularly sharp and the Habs took advantage of Johnny Oduya's two turnovers to build a 2-0 lead.

The first ended up on the stick of Cammalleri, who quickly beat Ondrej Pavelec with a nice wrist shot at 3:05 of the first period. Plekanec made it 2-0 at 14:17 of the second after winning a puck battle with Oduya.

"We gave up some free pizzas in the middle of the ice," Noel said. "The first one ... that's exactly what good players do. Turnovers result in goals. One chance, and it's in the back of your net."

The return of big-league hockey to Winnipeg had fans celebrating in the streets hours before the puck was even dropped. Horns honked on the downtown streets and strangers high-fived on the sidewalk -- many of whom had dug deep in their closet to pull out vintage Jets sweaters.

The sold-out crowd inside the 15,004-seat building -- the smallest in the league -- included Bettman, Prime Minister Stephen Harper and a number of former players from the original Jets. And the atmosphere was raucous from the moment a pregame video on the scoreboard ended with the words "It's Time."

It was the kind of scene owner Mark Chipman had long imagined in his dreams while plotting a way to convince the NHL to return. He's been completely humbled by the response from the community since buying the Thrashers on May 31.

"Even when I do pinch myself, it doesn't come to me."

He's as competitive as any owner in the league and will be expecting better things in the weeks ahead. 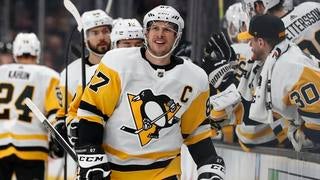